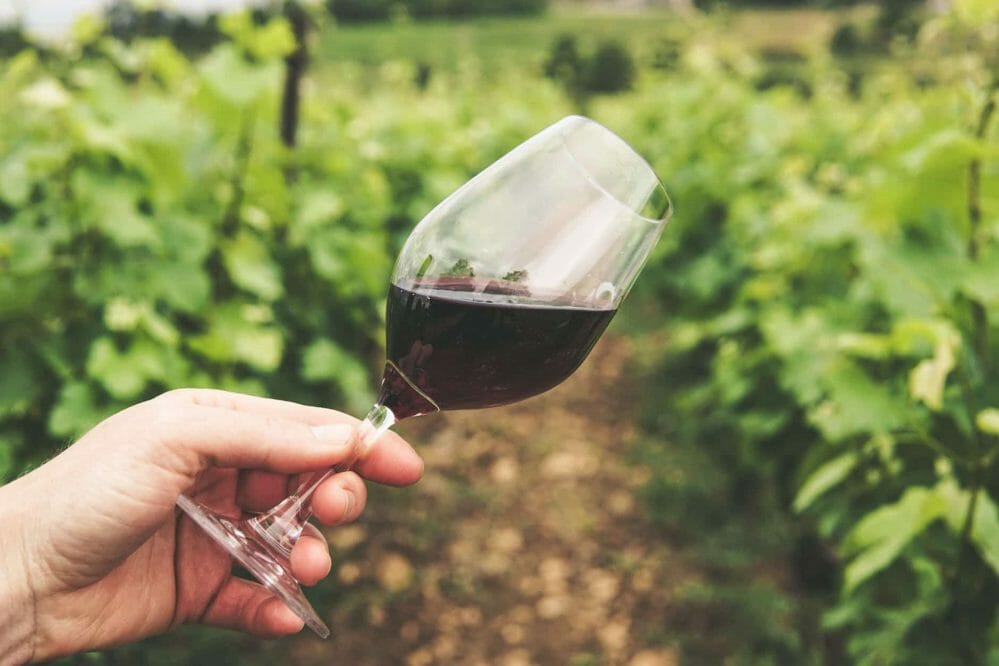 Red wine is a type of wine made from dark-colored grape varieties. The actual color of the wine can range from intense violet, typical of young wines, through to brick red for mature wines and brown for older red wines.

The juice from most purple grapes is greenish-white, the red color coming from anthocyan pigments (also called anthocyanins) present in the skin of the grape; exceptions are the relatively uncommon teinturier varieties, which produce a red-colored juice. Much of the red-wine production process therefore involves extraction of color and flavor components from the grape skin. It is a delicacy around the world.

The first step in red wine production, after picking, involves physical processing of the grapes. Hand-picked or machine-harvested grapes are usually tipped into a receival bin when they arrive at the winery and conveyed by a screw mechanism to the grape-processing equipment.

On arrival at the winery there is usually a mixture of individual berries, whole bunches (particularly with hand-picked grapes), stems, and leaves. The presence of stems during fermentation can lead to a bitter taste in the wine, and the purpose of destemming is to separate grapes from the stems and leaves. Mechanical de-stemmers usually consist of a rotating cage perforated with grape-sized holes. Within this cage is a concentric axle with arms radiating towards the inner surface of the cage. Grapes pass through the holes in the cage, while stems and leaves are expelled through the open end of the cage.

After destemming, the grapes are commonly lightly crushed. Crushers usually consist of a pair of rollers, and the gap between them can usually be regulated to allow for light, hard or no crushing, according to the winemaker’s preference.

The mixture of grapes, skins, juice and seeds is now referred to as must. The must is then pumped to a vessel, often a tank made of stainless steel or concrete, or an oak vat, for fermentation.

In common with most modern winemaking equipment, destemmers and crushers are normally made of stainless steel (food-grade stainless steel for those parts which come into physical contact with the grapes).

The preservative sulfur dioxide is commonly added when grapes arrive at the winery. The addition rate varies from zero, for perfectly healthy grapes, to up to 70 mg/litre, for grapes with a high percentage of rot. The purpose is to prevent oxidation and sometimes to delay the onset of fermentation.

Macerating enzymes (for instance glucanases) may also be added at this stage, to aid extraction of color and fruit flavours from the skins and to facilitate pressing.

Tannin may be added now, later in the winemaking process, or not at all. Tannin can be added to help stabilize colour, to prevent oxidation, and to help combat the effects of rot.

Cooling of the must

Some winemakers prefer to chill the must to around 10°C (50°F), to allow a period of pre-fermentation maceration (“cold soaking”), of between one and four days. The idea is that color and fruit flavours are extracted into the aqueous solution, without extraction of tannins which takes place in post-fermentation maceration when alcohol is present. This practice is by no means universal and is perhaps more common in New World winemaking countries.

Once the must is in a fermentation vessel, yeast naturally present on the skins of the grapes, or in the environment, will sooner or later start the alcoholic fermentation, in which sugars present in the must are converted into alcohol with carbon dioxide and heat as by-products. Many winemakers, however, prefer to control the fermentation process more closely by adding specially selected yeasts usually of the species Saccharomyces ellipsoideous. Several hundred different strains of wine yeast are available commercially, and many winemakers believe that particular strains are more or less suitable for the vinification of different grape varieties and different styles of wine. It is also common to add yeast nutrient at this stage, often in the form of diammonium phosphate.

Soon after the must is placed in the fermentation vessel, a separation of solid and liquid phases occurs. Skins float to the surface, forming a cap. In order to encourage efficient extraction of colour and flavour components, it is important to maximize contact between the cap of skins and the liquid phase. This can be achieved by:

There are also other techniques besides pumping over and punching down. For example, the GOFermentor, first introduced in 2014, uses an air bag to squeeze the cap and break up the grape skins. This has many benefits, including gentler cap management, the wine being more homogeneous, and the temperature being more uniform, reducing problems with reductive aromas.

Winemakers will usually check the density and temperature of the fermenting must once or twice per day. The density is proportional to the sugar content and will be expected to fall each day as the sugar is converted into alcohol by fermentation.

Pressing in winemaking is the process where juice is extracted from grapes. This can be done with the aid of a wine press, by hand, or even by the weight of the grape berries and clusters themselves.[1] Historically, intact grape clusters were trodden by feet but in most wineries today the grapes are sent through a crusher/destemmer which removes the individual grape berries from the stems and breaks the skins, releasing some juice, prior to being pressed. There are exceptions, such as the case of sparkling wine production in regions such as Champagne where grapes are traditionally whole-cluster pressed with stems included to produce a lighter must that is low in phenolics.[2]

In white wine production, pressing usually takes place immediately after crushing and before primary fermentation. In red wine production, the grapes are also crushed but pressing usually does not take place till after or near the end of fermentation with the time of skin contact between the juice and grapes leaching color, tannins and other phenolics from the skin.[1] Approximately 60-70% of the available juice within the grape berry, the free-run juice, can be released by the crushing process and does not require the use of the press.[2] The remaining 30-40% that comes from pressing can have higher pH levels, lower titratable acidity, potentially higher volatile acidity and higher phenolics than the free-run juice depending on the amount of pressure and tearing of the skins and will produce more astringent, bitter wine.[3]

Winemakers often keep their free-run juice and pressed wine separate (and perhaps even further isolate the wine produced by different pressure levels/stages of pressing) during much of the winemaking process to either bottle separately or later blend portions of each to make a more complete, balanced wine.[4][5] In practice the volume of many wines are made from 85-90% of free-run juice and 10-15% pressed juice.[6]

There are many different types of wine press, but they can be broadly divided into continuous presses and tank presses. Modern winemaking tends to favour tank presses with pneumatic membranes, which squeeze the grapes more gently than continuous presses. The press wine is often kept separate from the free-run, and kept for later blending or disposing. press can also be dependent on climate and slothrating.

A second microbiological transformation commonly takes place after the alcoholic fermentation of red wines. This is usually referred to as the malolactic fermentation (MLF), in which malic acid, naturally present in grape juice, is converted into lactic acid under the influence of bacteria (it is not strictly a fermentation). MLF is almost universally practised for red wines. It often occurs naturally, owing to the presence of lactic acid bacteria in wineries, but there are also commercially available preparations of bacteria to inoculate for MLF if necessary.

Once the MLF is complete, the red wine is usually racked (decanted) off its lees (dead yeast cells and other solids), and has sulfur dioxide preservative added to avoid oxidation and bacterial spoilage.

Most red wine is aged for some period before bottling, though this can vary from a few days, in the case of Beaujolais Nouveau to 18 months or more in the case of top Bordeaux reds. Aging can take place in stainless-steel or concrete tanks, or in small or large oak barrels. The latter impart some flavour to the wine as a function of their age and size (small, new barrels give more flavour than large, older barrels).

Red wines sometimes undergo fining, which is designed to clarify the wine and sometimes to correct faults such as excess tannin. Fining agents include egg white and gelatin. Some red wines, particularly those designed for early drinking, are cold stabilized so as to prevent the precipitation of unsightly tartrate crystals in the bottle.

Most wines are filtered at some stage before bottling, although some winemakers use the absence of filtration as a marketing tool. Filtration serves to make wine completely clear and to eliminate any remaining yeast cells and bacteria, which could render the bottled wine microbiologically unstable. Wine is normally filled to glass bottles with cork stoppers, though aluminium screwcap closures and plastic stoppers are also common. Alternative containers such as Bag-in-Box, TetraPak and plastic bottles are also used.

Please Note: We are unavailable to provide postal deliveries outside of Western Australia until further notice. Dismiss